What's in a Name?

It's been a busy but exciting few weeks.   I've been hard at work gathering together lots of data: objective data about student learning behaviors from Echo360 as well as Blackboard; but also subjective data about their experiences in my "stealth" flipped class this semester.  Together with my assessment specialist, Stephanie Corliss, I put together a poster that told the story of my efforts to transform Introduction to Ancient Rome into a course that emphasized active learning, high levels of student engagement, and cumulative learning.  It was an incredibly gratifying experience to see in the charts and graphs the positive effects of the stealth flipped model on student learning and achievement. 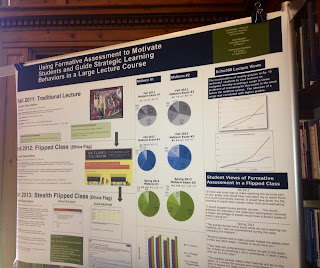 Subjectively, I can tell that there's a big difference in the depth of learning and engagement in the spring cohort as compared to the fall cohort.  Some of this can be attributed to the fact that it's spring semester and incoming freshmen have become more accustomed to the ways of college coursework.  Given that at least 50% of the students aren't freshmen, though, something else has to be going on.

In a recent post on her excellent Peer Instruction blog, Julie Schell highlighted two key elements of my approach to this spring cohort: avoidance of the term "flipped" (instead, I use words like active, engaged, student-centered); and the introduction of more structure and weekly formative assessments.  These two tweaks, both of which came about in response to survey and other data collected from the students in the fall semester, have been crucial to the success of the spring "stealth" flipped class.

In the fall, I followed all the advice in published research that said that, for students to "buy in" to a flipped class, it was important to make them full partners in the process.  I spent an entire class period, on the second class meeting, explaining what a flipped class was; how it worked; and why we were going to be using it that semester.  I also explained what we would be doing with class time now that content delivery was shifted outside of class.  This was all recorded on Echo360 and available to the students throughout the semester.  By the end of the semester, it was clear from the various surveys that about 30% absolutely loved the flipped class; about 30% hated it; and 40% didn't care one way or the other.  One theme that repeated was the extent to which the students who didn't like the flipped class blamed the model for things that had nothing to do with the model (most obviously, the work load and expectations on exams).  It was also clear from activity on the class FB page that there was a very vocal minority (perhaps 5% of the class) who believed that they could force UT to abandon this pedagogical experimentation if they refused to play along.  This vocal minority became the quintessential resistant students.

In retrospect, it's not surprising to me that some of my students would have a less than enthusiastic response to the news that they are part of an institutional teaching experiment.   After all, nearly all of them are taking the course to satisfy a graduation requirement.  They last thing they want is to have a random Classics professor experimenting on them!  Even if they have some inherent interest in the ancient world, they are there to get their box checked off and move on--all without taking a hit to their GPA (after all, humanities classes are "easy").   Perhaps even more importantly: it's not a class in their major and they aren't going to take additional classes on the subject.  Arguments about increased learning don't carry much weight with this crowd.  They care about grades, not learning (or, at least, not learning at the possible expense of their final grade)--they made this point very clearly on various surveys.

During the winter break, I spent a lot of time thinking about how to do a better job of getting students to see the payoff of buying into the flipped class.  I knew that this would be a huge challenge since I have 400 students and the nature of my relationship with them is markedly different than in a class of 15 or 30 or even 50.  No matter how nice and approachable and communicative I am, they feel a sense of distance from me.  This distance was brought home to me when I had a TA taking some pictures of the class from the back of the room. 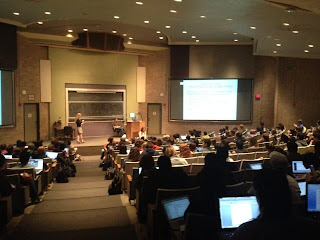 It was fascinating to realize what I looked like to those students seated in the middle or back of the auditorium.  When I teach a 25 student undergraduate class in a seminar room, I can build an effective personalized relationship with each of my students; and use that relationship with them to walk them through the flip process.  That is not possible in a classroom of 400 non-majors.  What we found in the fall was something very interesting: by labeling the class a "Flipped Class", by using the pedagogical jargon du jour, I was creating a massive sense of disorientation for my class.  They were in a large auditorium yet I was telling them that I wasn't going to lecture.  They absolutely couldn't see or accept the rational--and evidence-based--arguments for practicing recall and application of content in class in place of traditional lecture.  Even students who did very well in the course reported a sense of disorientation.  As any experienced educator knows, disorientation is not conducive to learning.

My goal in the spring version of the flipped class was to find a way to orient the students, to get them to feel comfortable in my classroom while also pushing against that comfort zone.  I had learned that if I pushed them entirely out of their comfort zone, they would respond with resistance--and nobody won.  I was pouring a ton of effort into the course but the class grades were essentially identical to the traditional lecture version.  I consulted with my team of learning and assessment specialists, and we decided to try something out: we would make some important tweaks (adding quizzes and a discussion board; bringing back a small amount of lecture into class); but we would also try to avoid giving the students something to "blame" when they felt overworked or stressed.

Let me be clear: nobody ever deceived the students in any way.  Far from it.  The class syllabus spelled out in precise detail how the class would run and what was expected of the students.  The second class day was devoted to a "class orientation", during which I went through each element of the class (e.g. i>clicker, discussion board, peer discussion) and explained how it would work and why we were doing it.  I explained that this active approach would help them master Roman history.  I simply avoided labeling the class.  I used descriptors, like "active", "engaged," "using peers as important learning resources".  This lecture was recorded using Echo360 and has been available to the students throughout the semester.  In addition, the students did a learning strategies survey for CTL, at the top of which they were told that CTL was doing research on student learning in large lecture courses.

Throughout the semester, I have had "meta" conversations with the class about how the different parts of the class are helping them to learn the material.  My partners in the Center for Teaching and Learning administered carefully designed "exam wrappers" after each midterm so that students have the chance to reflect on their learning strategies and the way that the different parts of the class are helpful (or not) to their learning; and also to think about how they might improve their approach.  On each exam wrapper, we ask them if there is anything that the teaching team can do to improve their learning experience.  These comments are collected and sent to me by the CTL team and we make adjustments when appropriate.  Despite the enormous class size, there is a steady dialogue between the students, me, and the teaching team.

By abandoning the formal terminology and presenting the class as "this is just the way I teach a lecture class" rather than as a "flipped class", I've found a way to motivate the students to, in fact, flip the class.  Indeed, one of the great lessons of the fall was that, while I could design a flipped class, only the students could truly "flip the class."  It took a number of tweaks to get them to flip, to embrace a model of learning that both puts them at the center but also expects a lot out of them.  It is deeply satisfying to me to see this spring cohort doing this; and, thereby, seeing marked improvements to their learning and achievement.

Jen Ebbeler
I am an Associate Professor of Classics at UT Austin. I have worked at UT for an ill-omened 13 years and have taught every sort of course we offer, from beginning level lecture classes; Latin language and literature courses; to specialized graduate seminars on Latin letter-writing and the cultural history of late antiquity. This blog my experiments with digital teaching. ln May 2015, I finished a two year project, working with a team of students and recent PhDs, to create, deploy, and revise a fully online, asynchronous version of my Intro to Ancient Rome. That course has been handed over to the care of the Classics Department and I am at work on new projects, including a book with the working title "Teaching and Learning in the New Digital Ecosystem." The book draws on my own experiences but also puts them in the context of the larger conversation about the role of the digital in (public) higher education. I am a passionate advocate for directing resources to campus-based teaching initiatives.